An Evening with FREEMAN’s

Come for a night in celebration of Freeman’s new issue, centered around the theme of “Family,” from the former editor of Granta and lecturer at the School of Writing, John Freeman. Featuring readings, conversations and performances by Valeria Luiselli, Sharon Olds, Tracy K. Smith, Garnette Cadogan, Ruddy Roye, Alexander Chee, and Aminatta Forna, presenting stories about family life, by turns amusing, heartbreaking, and probing. This second issue of FREEMAN’S: Family circles the globe and collects the most amusing, heartbreaking, and probing stories about family life emerging today. Co-sponsored by The New School Creative Writing MFA Program and McNally Jackson Booksellers.

Admission with a $15 purchase of the book that comes with a $15 gift card at Strand Books.

Against Everything with Mark Greif and Wesley Morris

n+1 founding editor Mark Greif launches his newest book of cultural criticism and argument, Against Everything.

Mark Greif received a BA summa cum laude from Harvard in history and literature; an M.Phil. from Oxford in English as a British Marshall Scholar; and a Ph.D. in American studies from Yale. In 2004, he co-founded n+1, and has been a principal at the magazine since. In 2005 and 2007 his essays were chosen for The Best American Essays. His scholarly book, The Age of the Crisis of Man, was published in 2015 by Princeton University Press. In 2013–2014, he was a member of the Institute for Advanced Study in Princeton, New Jersey, in its School of Social Science. In 2015, he was awarded the Charles Ryskamp Research Fellowship from the American Council of Learned Societies. 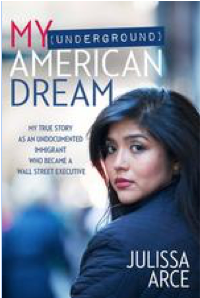 Thousands of people work on Wall Street, coming from various backgrounds and parts of the country, but Julissa Arce is the only one who can say that during her time as a Vice President at Goldman Sachs she was an undocumented immigrant.

Now that she’s left Wall Street, Julissa has become an advocate for rights for undocumented immigrants. She will be joined by award-winning writer and filmmaker Alberto Ferreras, who most recently directed HBO Latino’s Habla y Vota, in the Rare Book Room as she discusses and signs her memoir, My (Underground) American Dream: My True Story as an Undocumented Immigrant Who Became a Wall Street Executive.

Admission with a $15 purchase of the book that comes with a $15 gift card at Strand Books.