On Tuesday, September 27, the students in the Magazine Production and Design course got the chance to go to the opening lecture in the Labor, Literature and Landmark Lectures Series at the General Society Library, founded in 1785. The lecture was in honor of the 70th anniversary of Penguin Classics and the launch of a new book, Classic Penguin: Cover to

The lecture started with a simple question: “What makes a classic?” After sharing her opinion that classics are the books that have had readers in the past, and will be guaranteed to have readers in the future, Rotor moved on to discussing specific projects and covers that have been created by Penguin Classics. Buckley said that they wanted to “let the titles do the work,” and that the typography should encapsulate the “flavor of the book.”

Rotor and Buckley also discussed the new use of Penguin’s traditional orange and white tri-band, which has never before been used in American publications by Penguin, in the Penguin Orange Collection. Buckley discussed how he wanted to add a new level of creativity to the basic design by adding additional dimensions, like having images weaving in and out of the bands. This is something that we all strive to do with cover design: maintain the traditional branding of books and magazines, keep the recognizable images, while also finding something new to do with the old designs.

When discussing books like Lord of the Flies and The Haunting of Hill House, Rotor and Buckley talked about finding the right imagery to accompany the book. Even though the final covers are not always what they originally imagine, but they always end up being the perfect representations of the books. For example, in discussing The Haunting of Hill House, the house is actually barely scene in the far background of the cover, which instead dramatically depicts a single pivotal scene from the book in the forest.

Rotor and Buckley’s lecture on cover design at Penguin Classics covered topics of science fiction books, horror books, international books, collections and series of books, and even touched on the process of dealing with authors and estates. However, what it really boiled down to was the importance of the cover for a book. As Rotor put it, the cover is “sparking [the reader’s] imagination and curiosity,” as their first impression of the book ultimately comes from the cover. After the lecture, copies of the new book Classic Penguin: Cover to Cover, were available for purchase and signing. It was truly a great experience to be able to hear from the people that really work hard to make sure the visual of a book is stunning. It was a great learning experience that the Magazine Production and Design class had the unique opportunity to experience. 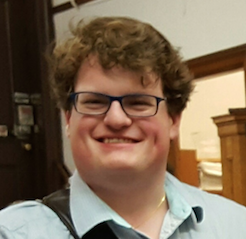 Kevin Baker is a graduate student studying magazine publishing at Pace University, with a particular interest in design and editorial work. In the past, he has worked as an intern at his undergraduate college magazine at York College of Pennsylvania, YC Magazine​, as an writing, proofreading, and fact-checking intern.