“Whether we change our lives or do nothing, we have responded. To do nothing is to do something.” 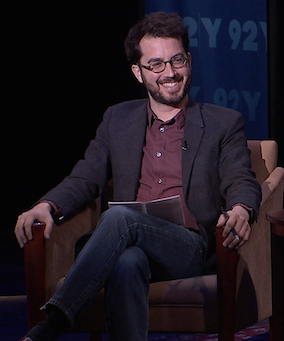 Jonathan Safran Foer is an American novelist and activist with Polish roots. Foer began to seriously pursue writing as a career after working closely with his thesis advisor, Joyce Carol Oates, during his time at Princeton. His thesis won him Princeton’s Senior Creative Writing Thesis Prize, which he then expanded and made into his first novel, Everything is Illuminated. Foer followed this up with what is perhaps his most well-known book, Extremely Loud and Incredibly Close, which incorporates visuals to tell a story surrounding the 9/11 tragedy. His most recent novel, Here I Am, is a fictional retelling of a family inspired by his own life. Other projects he’s worked on include his nonfiction animal rights activism book Eating Animals, and his play on Bruno Schulz‘s book The Street of Crocodiles by blocking out text to create a new story in Tree of Codes.