Quote of the Week | Tom Wolfe

Well, everyone, we’ve made it to week two. First and foremost, congratulations. Between classes, assignments, and publishing events, we’ve all hit the ground running.

For returning students, the transition from summer to fall is a familiar one. For new students, many of whom have never lived – or perhaps even visited – this dense and sprawling city, the shift and pace of life can seem overwhelming and mysterious. Even the great mystery novelist Agatha Christie is reported to have said, “It is ridiculous to set a detective story in New York City. New York City is itself a detective story.”

That said, the American novelist, poet, and short story writer John Updike is renowned for having said, “The true New Yorker secretly believes that people living anywhere else have to be, in some sense, kidding.”

These teaser quotes have paved the way for what the blog is going to spotlight today for the Quote of the Week. It is an uplifting, hopeful statement  meant to put New York City newbies – those who are familiarizing themselves with Updike’s understanding of the city’s charms – at ease.

Tom Wolfe was born in Richmond, Virginia in 1931. After studying at Washington and Lee and Yale, he became a reporter. Very early on in his career, his coverage of Cuba for The Washington Post won him the Washington Newspaper Guild’s foreign news prize. Wolfe is best known, however, for helping to bring about the New Journalism movement, in which literary techniques were combined with journalistic principles to highlight actual events. Wolfe is also the author of 14 books. His most recent novel, I Am Charlotte Simmons, was published by Picador in 2005. (Picador is a Macmillan imprint.) 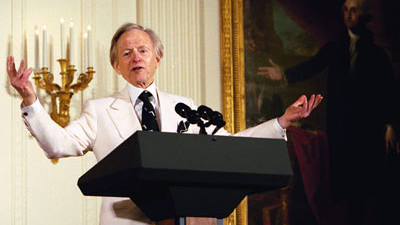 For more on Tom Wolfe, check out this interview with The Daily Beast on memoirs and memory.