Link of the Week | Banned Books

We’re halfway through Banned Books Week, an event that celebrates people’s right to read and reiterates the importance of the First Amendment:

According to the American Library Association, to challenge a book is to “attempt to remove or restrict materials, based upon the objections of a person or group. A banning is the removal of those materials. Challenges do not simply involve a person expressing a point of view; rather, they are an attempt to remove material from the curriculum or library, thereby restricting the access of others. As such, they are a threat to freedom of speech and choice.”

Books have been challenged/banned in the United States since the publication of Uncle Tom’s Cabin in 1852 when the anti-slavery novel was deemed inappropriate for popular consumption because of its pro-abolitionist message. (In case you missed it, Monday’s blog kicked off #BannedBooksWeek with a post on the woman who started it all: Harriet Beecher Stowe.)

The practice of book banning continued well into the 1920s after Anthony Comstock, then a well-known politician, helped push a law through Congress that banned “obscene literature” from being sent in the mail (his definition of “pornography” extended so far as to include Medieval works like The Canterbury Tales). Influential court cases, however, like The United States v. One Book Called Ulysses in 1933 and Roth vs. The United States in 1957, combined with the social revolutions of the 60s and 70s, made room in the market for books with strong language and depictions of sex and violence. 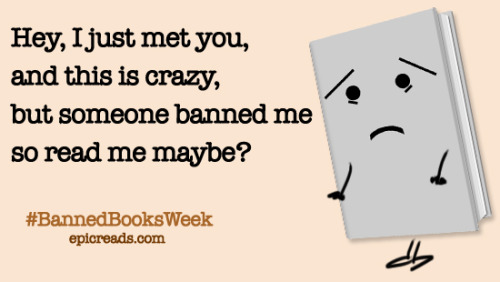 While some challenged titles may be not surprise you – E.L. James’s Fifty Shades of Grey made the American Library Associations’ Top 10 Most Challenged Books List in 2015 – others may cause your eyebrows to lift. Charlotte’s Web, for example, by E.B. White, Harry Potter, by J.K. Rowling, The Giving Tree, by Shell Silverstein, and Where the Wild Things Are, by Maurice Sendak, all faced parental pushback upon publication.

The Library of Congress has also put together a list of books that have been banned/challenged over the years that “have had a profound effect on American life.” In 1885, The Adventures of Huckleberry Finn, Mark Twain’s beloved American classic, was deemed “trash and suitable only for the slums.” In the 60s, The Autobiography of Malcolm X , Truman Capote’s In Cold Blood, and Harper Lee’s To Kill a Mockingbird faced similar vitriol.

This One Summer by Mariko Tamaki and Jillian Tamaki was the number one challenged title of 2016 because of its “LGBT characters, drug use and profanity,” and sexual content. The book went on to become a New York Times bestseller, a 2015 Caldecott Honor Book, a 2015 Michael L. Printz Honor Book, and an Eisner Award Winner.

NYC’s Strand Bookstore has assembled a special table for banned books this week. Did your favorite make the list?