On October 14, Richard Wilbur, second Poet Laureate of the United States, passed away at the age of 96. Wilbur worked as a writer for more than 60 years and valued “traditional virtuosity over self-dramatization.” He won his first Pulitzer for the collection Things of This World: Poems, published in 1956 (it also won the National Book Award), and his second Pulitzer for New and Collected Poems, published in 1989.

He was also a renowned translator. His expressions of French verse – most notably works by Voltaire, comedies by Moliere, and tragedies by Racine – are highly regarded by critics. Wilbur won the Bollingen Prize, one of the most prestigious prizes available to American writers, for his translation of Moliere’s Tartuffe in 1971. (Other Bollingen Prize winners include Ezra Pound, Wallace Stevens, Marianne Moore, and E.E. Cummings.) 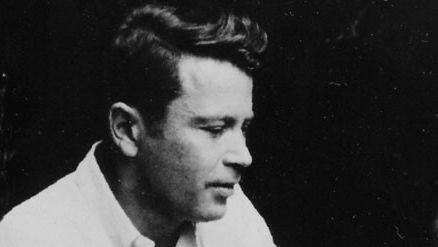 Today’s Quote of the Week commemorates the life of the man who has been called “a poet for all of us, whose elegant words brim with wit and paradox.”

“It is true that the poet does not directly address his neighbors; but he does address a great congress of persons who dwell at the back of his mind, a congress of all those who have taught him and whom he has admired; they constitute his ideal audience and his better self.” —Richard Wilbur

Richard Purdy Wilbur was born on March 1, 1921 in New York City to Helen Purdy and Lawrence Lazear Wilbur, a portrait painter. At the age of 2, his family moved to North Caldwell, NJ where he enjoyed exploring the woods that surrounded his home with his brother Lawrence. Wilbur attended Amherst College in 1938 and wrote stories, editorials, and poems for the college’s newspaper and magazine. He had always been interested in journalism – his maternal grandfather had been an editor at The Baltimore Sun and his great-grandfather had been a publisher, editor, and founder of several Democratic newspapers in the United States.

After fighting in WWII, Wilbur pursued graduate studies at Harvard before becoming an assistant professor in 1950. After Harvard, he taught at Wesleyan University for 20 years and Smith for 10 before returning to Amherst. At 90, he was still a profound presence on campus – Amherst celebrated his birthday in 2010 with public readings of his poems and translations.

Wilbur’s last collection of poems and translations, Anterooms, was published in 2010. An example of his work, “Exeunt,” is excerpted in the above image. For more Richard Wilbur, watch the author read “Love Calls Us to the Things of This World” for Web of Stories.