Quote of the Week | Amanda Gorman

Amanda Gorman, 19, was named the first-ever Youth Poet Laureate of the United States on April 26, 2017. A community leader, activist, and author, the Harvard University sophomore is thoughtful, cadenced, and ambitious – and is looking forward to running for president in 2036.

In 2013 – at just 16 years old – Gorman became a youth delegate for the United Nations and was named the inaugural Los Angeles Youth Poet Laureate. A year later, she published her first poetry collection, The one for whom food is not enough, with Penmanship Books. (The title is a reference to Lorraine Hansberry’s A Raisin in the Sun.) Luis J. Rodriguez, Poet Laureate of Los Angeles from 2014–2016, says Gorman “draws from deep wells – of ancestors, community, suffering souls, vibrant women, hungry youth, radiant courage, and the un-mined gold of language. Many poets have come before, but no one with the twists, turns, and surprises that Amanda brings to the page and in performance. Don’t doubt she’s going to be a major literary figure in this country, if not the world.” 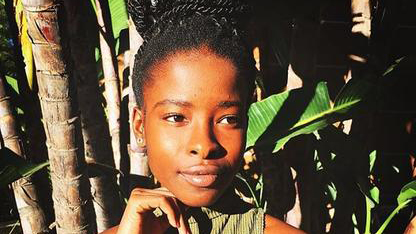 In The New York Times’s “Up Next” feature last Friday, Gorman said she sometimes feels “like a unicorn” in the sense that not many people know about the National Youth Poet Laureate designation. That said, she’s adamant on using her platform to address issues of race, feminism, and adolescence in today’s tumultuous America.

“I did a lot of sitting back and thinking about what I wanted for myself and what I wanted for my country: more unity, more support for the arts, and more opportunities for young writers from marginalized groups.” — Amanda Gorman, The New York Times

In 2016, Gorman founded One Pen One Page (OPOP), a nonprofit organization that promotes literacy and leadership via creative writing workshops. In addition to acting as the nonprofit’s Executive Director, she is the Editor-in-Chief of OPOP’s online literary magazine, which “elevates the voices and powers of youth through literal and visual storytelling.”

Last September, Elle Magazine published one of Gorman’s poems. The first stanza is copied below.

Watch Amanda Gorman Perform “An American Lyric” at the Library of Congress. You can follow her on Twitter @AmandaSCGorman.