Quote of the Week | Edwidge Danticat

On November 9, late in the evening, the University of Oklahoma’s award-winning magazine of international literature and culture, World Literature Today, announced the 2017 winner of the Neustadt International Prize for Literature: Edwidge Danticat. In addition to a certificate and prestige, the award comes with a $50,000 stipend and a replica of an eagle feather cast in silver. (#Swag.) The Haitian-American writer is the 25th laureate of the prize.

Danticat is the author of 15 books: five works of fiction, four works of nonfiction, and six works for children and young adults. Known for referencing the less-than-familiar histories of Haiti and the Caribbean, Danticat likes to “experiment with form and structure…[and] paint scenes of immigrant life in New York and Miami with fresh details and palpable familiarity.” Her latest book, The Art of Death, is a deeply personal account of her mother’s struggle with cancer, and the ways in which other writers – like Tolstoy, Gabriel García Márquez, and Susan Sontag – deal with death in their own work. The New York Times called the book a “purposeful act of grieving…[in which Danticat] learns how to use language to try to express the inexpressible, to use her art to mourn.” 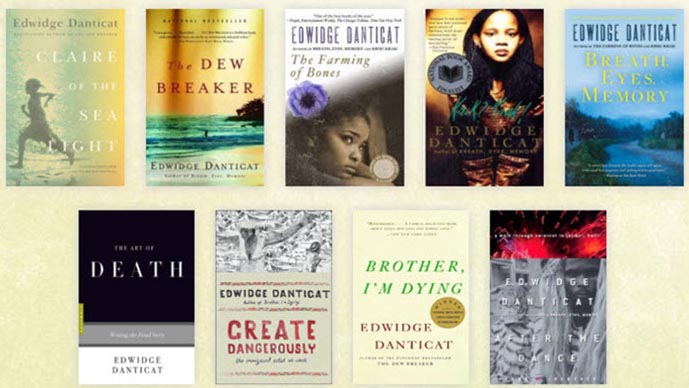 In honor of Danticat’s Neustadt win, our Quote of the Week features the author who compares writing to braiding hair – like “taking a handful of coarse unruly strands and attempting to bring them unity.”

“Create dangerously for people who read dangerously…knowing in part that no matter how trivial your words may seem, someday, somewhere, someone may risk his or her life to read them.” — Edwidge Danticat

More on the award: often referred to as the “American Nobel,” the Neustadt International Prize for Literature is awarded every two years and is the “first international literary award of [its] scope to originate in the United States and is one of the very few international prizes for which poets, novelists and playwrights are equally eligible.” The award is named after the family behind the endowment, but the Neustadts have no part in the selection process. Authors alone sit on the prize jury, to prevent booksellers and publishers from influencing results.

In addition to the Neustadt International Prize for Literature, Danticat has won a Pushcart Prize (a small-press award), a National Book Critics Circle Award, a BOCAS Prize, an Andrew Carnegie Medal for Excellence in Fiction, and a MacArthur Fellowship. She also holds two honorary degrees – one from Yale and one from Brown.

Below is Meet the Writer from Haiti, a video in which Danticat “shares her experiences with Girl Rising and what it was like getting to know Wadley.”