Quote of the Week | George North, the Original Bard? In February, Shakespearean purists sat a little straighter in their chairs.
Independent researcher Dennis McCarthy and English scholar June Schlueter had just announced what Michael Witmore, the director of the Folger Shakespeare Library in Washington, called a “once-in-a-generation – or several generations – find.” Stashed away in the British Library, the pair had discovered a previously unpublished manuscript that, when scanned using the open-source plagiarism program WCopyfind, revealed extremely-likely source material for eleven of Shakespeare’s plays, including King Lear and Macbeth. 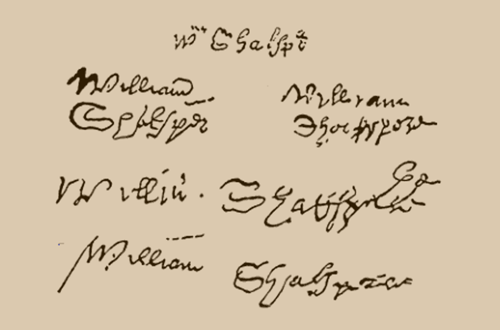 The six signatures of Shakespeare. Image courtesy of The Shakespeare Oxford Fellowship.

The manuscript, A Brief Discourse of Rebellion and Rebels, was written by 16th century courtier George North, who served as an ambassador to Sweden under the reign of Queen Elizabeth I. While it’s clear Shakespeare didn’t plagiarize North’s material word-for-word, McCarthy and Schlueter are confident Shakespeare “read and was inspired by” North’s use of language.

According to The Guardian, McCarthy and Schlueter “were able to trace more than 20 passages back to the essay, including Gloucester’s opening soliloquy in Richard III, Macbeth’s comparison of dog breeds to different classes of men, the Fool’s Merlin prophecy in King Lear, and the events surrounding Jack Cade’s fatal fight with Alexander Iden in Henry VI.”

Words flagged by WCopyfind included  “proportion,” “glass,” “feature,” “fair,” “deformed,” “world,” “shadow,” and “nature.” North used these words in the dedication of his manuscript to “urge those who might see themselves as ugly to strive to be inwardly beautiful…In the opening soliloquy of Richard III (‘Now is the winter of our discontent …’) the hunchbacked tyrant uses the same words in virtually the same order to come to the opposite conclusion: that since he is outwardly ugly, he will act the villain he appears to be.”

McCarthy started looking for Discourse after he stumbled upon a mention of the work in a 1927 catalogue of rare books. He and Schlueter then searched for a year before finding Discourse in the British Library. They decided to run the manuscript through plagiarism software after reading about Sir Brian Vickers, who used similar methods to identify Shakespeare as a co-author of Edward III in 2009.

McCarthy and Schlueter’s book investigates the “linguistic and thematic correspondences between the North manuscript and Shakespeare’s plays, [which] make it clear that the playwright borrowed from this document [for] Richard III, Henry VI, Henry V, King John, Macbeth, and Coriolanus.” It also contains a transcript and facsimile of North’s original Discourse.

If you have $109.06 lying around, you can purchase McCarthy and Schlueter’s book here. The academic work was published on January 30 by D. S. Brewer.