Kathy Sandler is the Senior Manager of Content Applications and Digital Workflow Development at Penguin Random House. She is also an Adjunct Faculty member in the M.S. in Publishing Program at Pace University. She specializes in management, workflow, and publishing technology for eBooks and iPad apps and enjoys developing classes for people in the industry. She recently published an article on “Innovation in Publishing: This is not an Oxymoron!” for Publishing Research Quarterly.

In October 2016, I traveled with Pace to China to lecture at the 5th International Conference on Publishing Industry and Publishing Education in the Digital Era sponsored by Wuhan University and Pace University. It was a fantastic experience! Here are a few of the memories I’d like to share.
Personally, I was struck by the warmth of the people I met. It was very exciting to meet dignitaries from Phoenix Publishing & Media Group and China Publishing Group, which are among the largest publishing companies in the world. But it was heartening to meet a number of former students who were so grateful to Professor Raskin and Professor Lian for what they learned at Pace.

The opening panel of the Wuhan Conference. (Professor Raskin is the fourth speaker from the right.)

I was lucky to have a tour guide in Beijing who worked at China Publishing Group named Yin “Ling” Mengling. I spoke with her at length about some of the great opportunities available in publishing associations in New York. We also discussed a book called Designing Your Life, which I recommend people use to think about their career and life goals.

After we parted, she paid for her own overnight train to Wuhan to attend the weekend conference and take Professor Lian, Professor Raskin and me around Wuhan University. She has since started a Literary Salon speaker series for her friends and colleagues, which she said I inspired her to do. Mark Fretz, who also attended the conference as part of the delegation from Pace, spoke at the inaugural session. I am very proud of Ling and happy I was able to touch her life.
Another thing that struck me in China that I hadn’t fully appreciated before was the giant contribution that Professor Raskin and Professor Lian have made to publishing education in China. Professor Lian was actually one of the founding members of the first publishing program in China at Wuhan University and was instrumental in starting the partnership between Pace and Wuhan U. Professor Raskin has made extremely strong relationships with the major publishing companies in China and, because of this, the companies have hand-picked executives to come train at Pace every year. (And they were able to start the Confucius Institute at Pace University, where I took Chinese classes before I went.) I have a newfound respect for the hard work they have done to build such strong ties. 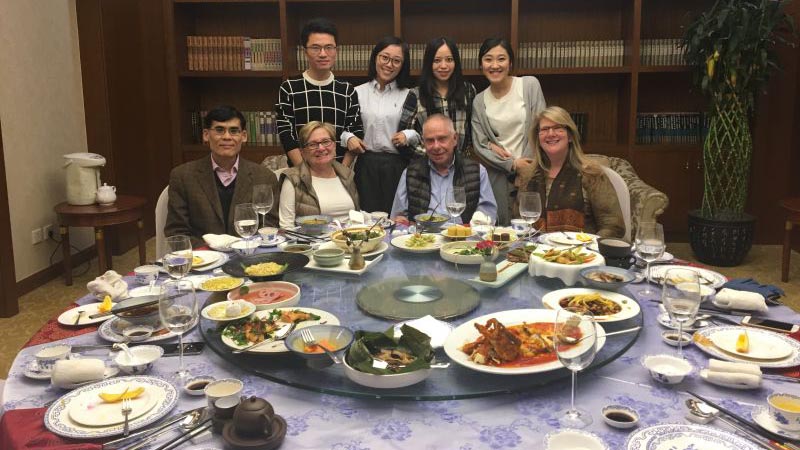 At the conference, my talk was on innovation. I spoke about projects in the publishing industry, including grass-roots efforts, where employees at any level can test their idea and pitch it to management. I was surprised that I was asked how an employee would be reprimanded if they had an idea that failed. I explained the value of a learning organization, where failing fast (and small) is a good thing. I was happy to see that they were thinking about how this idea could be implemented in their environment, and I hope in the future that organizations encourage their employees to submit ideas.

While Google, Facebook, Twitter, and other sites are blocked in China, the country is very technologically advanced. Most people use a platform called WeChat, which is a combination of the functionality of many programs in the U.S. like texting, FaceTime/Skype, Facebook, Twitter, and many others. (WeChat was created by TenCent, a phone company.) Many restaurants have you order and pay through your phone with Alipay, which is from the e-commerce company Alibaba, which has 423 million annual active buyers and about 80 per cent market share of e-commerce in China. There are QR codes everywhere on posters, bus shelters, ads, and menus, and they are very useful in connecting quickly through WeChat and other systems. I made many new contacts and friends in China and hope to stay in touch through WeChat.
I also visited many bustling bookstores in China. It was incredible to see the multi-story homage to the books owned by Phoenix Publishing & Media Group. I also visited a few branches of the Librarie Avant-Garde, including the famous one in a former bomb shelter/parking garage that has a beatnik vibe; a rustic one in a lush park, where you could sink into a comfy chair and feel like you were in a log cabin surrounded by books; and one on the Purple Mountain that sold only poetry books with lots of little rooms to explore. I felt right at home!
It was a fascinating trip, and I’m extremely grateful to have had the opportunity to go! It really opened my eyes to different perspectives and I learned a lot about international publishing, innovation, and myself.